Members of the P4EU network use diverse eucaryotic host organisms for recombinant protein production. A survey conducted in order to design a benchmarking study on protein expression in eucaryotic hosts showed major interest in Baculovirus and transient HEK293 expression systems: 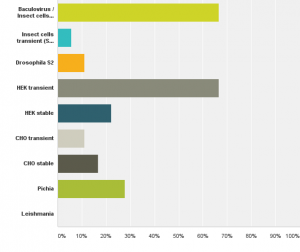 The rationale of this benchmarking study was to compare the performance of the protocols used in different protein production facilities for expression of a common set of target proteins. Different target proteins were chosen for expression in insect and HEK293 cells, as the aim of the study was not to compare insect vs HEK293 expression, but to identify the most successful protocols from both expression systems. The comparison of overall protocols, with their many variable parameters made it difficult to pin-point the individual parameter/s crucial for high performance although trends appeared to suggest the importance of certain parameters that can easily be investigated further in follow-up experiments. A positive aspect of this study was that the best performing protocol(s) were identified and can be used as a guide by those colleagues who experience problems, or are setting up a new insect cell platform, to navigate them through the many decisions that have to be made.